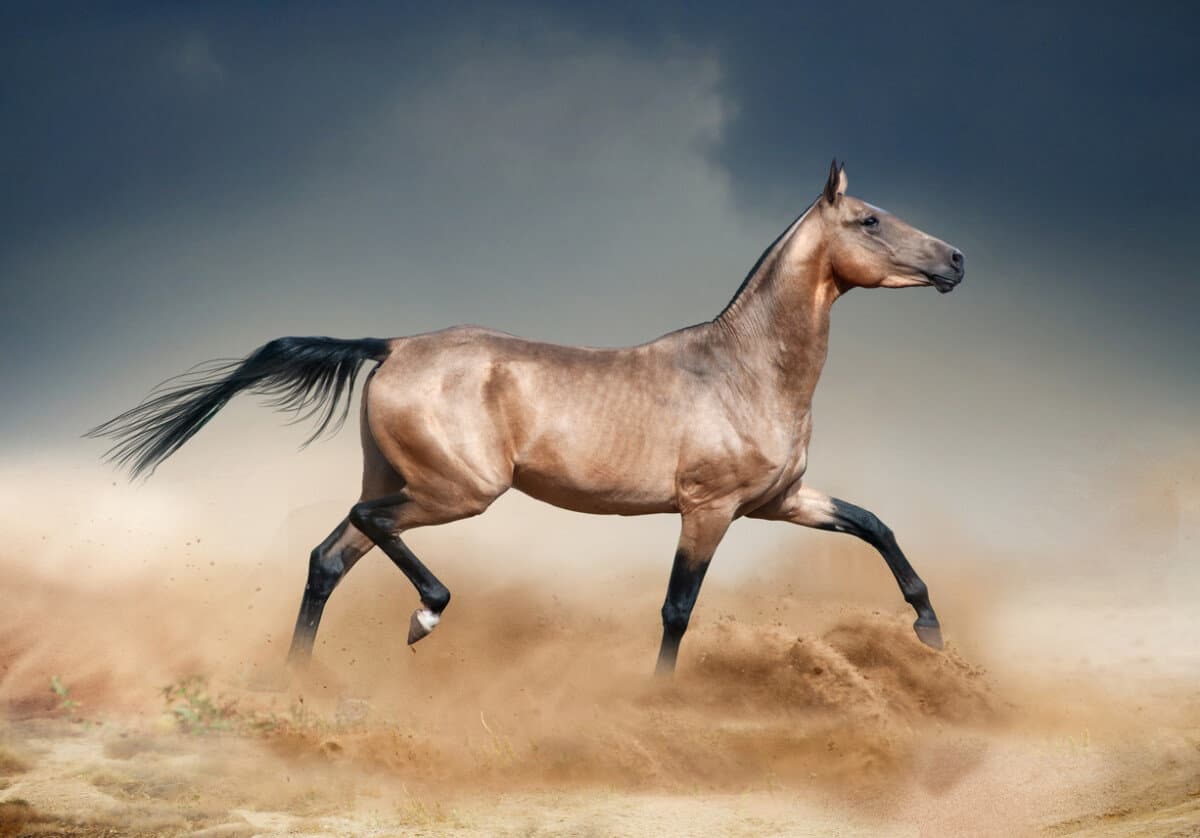 This Akhal Teke horse is one of myth and legend. Not only is the breed rare, but it is slowly fading away into the annals of history as a horse unlike no other. If horses were mere unicorns, it would not be difficult at all to compare them to the legendary and extraordinary beauty of the purebred Akhal Teke.

So, what makes this one horse breed so legendary? Actually, it isn’t just one thing that makes the Akhal Teke breed legendary. It’s lots of different things, each as unique as the breed itself.

Where It Is From

The Akhal Teke is from Turkmenistan. Turmenistan is a Central Asia country bordered by Kazakhstan, Afghanistan, Uzbekistan, and Iran. If you know where Iran or Afghanistan are because of the many wars there, then you know approximately where the Akhal-Teke is from. In short, this powerful desert equine is able to move swiftly over the dunes, much like its Arabian cousin. Its coat is very short to help the animal stay very cool in the desert environment. In fact, anyone wanting to breed these horses in colder climes have to keep the horses in extremely warm barns during fall and winter to prevent the horses from becoming ill.

The Incredible, Magical Coat of the Akhal Teke Horse Breed

Perhaps what makes these horses stand out from all others and more desirable than any other breeds in the world is its coat. The coat of the Akhal Teke horse breed is extraordinary and very unique. It is very short for keeping the horse cool in hot, arid places, but it also refracts light.Did you get that? The coat refracts light.

It has this unique layering of hairs that splits and reflects light, making light bounce and shine off the coat as though the coat were magically lit from within. It makes these horses absolutely stunning to see, and leaves people in absolute awe. The horses supposedly developed this coat as an adaptive measure so that predators would not and could not see them shining brightly in the sand dunes of their native territory.

If you ever manage to see one of these horses in real life, and it has a golden, white or platinum coat, it will be the closest living approximation to what some would imagine a unicorn to look like. The coats come in a range of colors, but nothing quite hits you like the dazzling light refracting off the coat of a golden, platinum or white Teke.

Their rarity is another reason why they are so desirable. They are hoarded by royalty of Turkmenistan and given as gifts of goodwill to other foreign leaders and emissaries. It is next to impossible to get the Turkmen to relinquish one, let alone a breeding pair, of these horses to leave their country.

It is understandable that they would not want the pure bloodlines of these horses to ever be muddied by other breeds as it would forever change the horses’ unique coats and body composition beyond recognition. However, it also presents the unique issue of causing the ancient breed to die out because not enough is being done to preserve them and help them survive when the horses are not allowed to leave their native country under penalty of law. Those who have managed to persuade Turkmen to sell two of the horses and export them had to do so under the strictest of contracts.

The Turkoman Empire once saw a magnificent horizon. Their incredible Turkoman horse was a horse breed that took centuries of careful breeding and patience to produce. A little bit of Arabian horse is in their blood, as seen by the fine outlines of the head and neck and the graceful legs. The Akhal Teke breed was originally bred for horse racing, much like the modern thoroughbred, except that the Akhal Teke’s stamina made it ideal for long races in sandy dunes through miles and miles of vast Karakum Desert. Later, endurance riding with these horses was so simple that even the youngest and least experienced riders of the Teke tribe could do it.

Now, the studbook is kept under such lock and key, purportedly in Ashgabat, Turmenistan’s largest city. Only those who own most of these horses in Turkmenistan are able to see which Akhal Teke stallion and which mare are fit to mate until both horses are no longer able to reproduce. It’s this tight-lipped security over the animals that put them at risk because of accidental inbreeding, or mating closely related animals outside of their native country. A decreased gene pool results, and the horses quickly become less able to thrive.

What This Equine Typically Eats in Its Original Habitat

While it is extremely unlikely that you will ever own this Turkmen horse, you might still want to know about their care and feeding. They live where there is almost no grass or green growing things most of the time. They often have to wander into mountain ranges far away to find food and forage. They eat whatever they can find and last on what they eat. Water is another problem, but as a race horse these animals have proven that they can go very long periods without water.

That’s not to say that you should never offer one water. It simply means that you should offer them just enough water and not over-water them. Grain is the closest thing to what they are fed in captivity, although the wild equines of this Central Asian country tend to eat whatever dry sparse weeds and grasses they can get. They may develop very sensitive digestive issues to the “beefy” grasses of American paddocks and meadows, so it is important not to let them over-consume as they roam.

They tend to be very lean horses with lots of muscle. If they eat too much or too fast, they could get bloat. Feed an Akhal-Teke small amounts throughout the day and monitor it for overeating while grazing.

Additionally, many problems can develop with their lungs, skin, coat, hooves, ears, and eyes, all due to their development over time in arid places. Placing one of these equines in a cold climate is a recipe for medical disaster. They cannot adapt well and they cannot adapt quickly to the cold either. Keep them very warm, blanketed all season, and indoors to prevent a number of health problems that result from being somewhere they are typically not used to being.

Their tiny, almost delicate hooves need a lot of care too. They will not take to mud the same way they can take to sand. Keep them shod and keep the hooves trimmed regularly to avoid thrush of their hooves, a painful condition and infection that takes a long time to heal if the animal develops it. Keep the frogs of the feet very clean so that your very shiny equine friend doesn’t end up unsound. If you take a holistic approach to prevent most illnesses and health problems with four-legged equine friends, you will rarely need to see a vet.

This ancient breed is not often bred outside of its native country. IF you are extremely fortunate to become an Akhal Teke breeder, there are a few things you should know and do. For one, you will need special permission from the Turk government to proceed. Two, your pair of horses will need to be tested for purebred blood. Three, you are more than likely going to be constrained never to cross these animals with any other equine UNLESS you have been told it is okay to do so.

That’s just for starters. Then you have to do genetic tests on your mare and stallion to make sure they are not close cousins, brother and sister, father and daughter, etc.. Any really close bloodlines will result in loss of foals and possible birth defects. It is serious business and seriously tricky business to be doing Akhal Teke breeding.

Rare Appearances in Public of These Equines

If you want to catch a glimpse of these modern-day “unicorns,” there are some places where you might spot one. Moreover, you may not spot a purebred, but a half-bred or partial bred equine. Despite the desire of the Turks to avoid this, some of the animals they have given as gifts ended up mating with other horses and producing foals with only a little of their ancestors’ amazing features.

For example, if you see a lean, small, limber equine with a shiny coat doing dressage, there is a good chance you may be looking at an A.T.. Since their shiny coats and ability to learn the delicate art of equine dressage is an ideal match, they are often trained to do this sport. In their native country they can be seen doing a lot of it in parades. If you happen to be in Ashgabat on a major national holiday, you will see one or more of these mythical beasts lightly stepping down the main streets of the city during a celebratory parade.

When Turk leaders give away a prized animal, there is often a press release about it. Then you will see one on TV or in a newspaper. There is quite the hullabaloo when this happens because of the extreme value and reluctance of the Turks to give away any of their prized national animals. On that note, you should also know that the animals are so prized that they are featured in many of the national monuments around the major cities in Turkmenistan.

Finally, if you happen to be anywhere in Central Asia during an important horse racing event, it would be most unusual not to see an A.T. in the race. Watch for the light refraction of the coat. It makes the animal stand out from all of the others against which it races. If many of the racing horses all have these shiny coats, you are looking at more than one A.T., particularly if you are in their home country.

Is the Akhal Teke horse gaited? Yes, in fact, smooth and flowing describes this amazing horse’s gait. This special and unique horse’s gait is further defined as selectively bred to perform a smooth to ride gait as well as intermediate speed and four-beat.

How fast can an Akhal Teke run? They are known and have developed a reputation for their intelligence, endurance, and incredible speed. They were considered one of the first and original racehorses.

What does akhal teke mean? Coming from Turkmenistan over 3,000 years ago, descending from the raiding horses, Akhal is associated with the nomadic and remote oasis. But its meaning is “pure”. And the second part of the name Teke means “tribe”.

Why are Akhal Tekes so shiny? The coat refracts light. It has this unique layering of hairs that splits and reflects light, making light bounce and shine off the coat as though the coat were magically lit from within. It makes these horses absolutely stunning to see.

Why are Akhal Tekes so rare? Due to economic and political turmoil in the late 1800’s in Russia, the Soviet region breeding barns began shutting down. The sleek-looking horse was no longer a priority and then began the gradual decline of this breed population. They are listed on the Conservancy’s Conservation Priority List (CPL).

What are A.T. horses used for? Many have partaken with this horse for general riding as well as competition. They perform well with several different disciplines including dressage, eventing, showjumping, and endurance. Although in Russia they are found in horse racing.

How much are A.T. horses? They can cost a pretty penny, consider about $10,000 on average. Although other points to consider are the training of the T.K., health, age, and pedigree status. This can significantly increase the cost. And, in particular, if they display the superior strong metallic sheen so well desired this can jump the price even more. So there are specific considerations when assessing the price of one of these beauties.