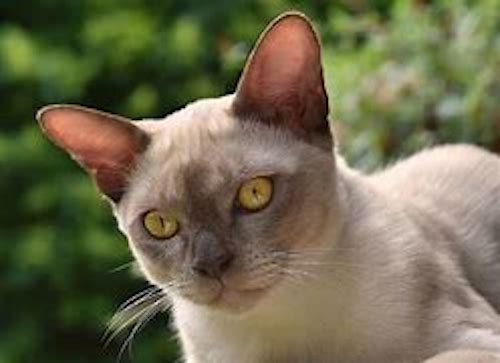 You may have heard about Burmese cats before, but you may not know a lot about them. A lot of times you may see a stray and someone might have said that the stray looks like a Burmese cat, but what does that really mean? To get a better idea and understanding about this unique breed of cat, you have to know more about its history and its unique features.

The Feral Cat of Burma

Like a lot of other feline breeds, the Burmese cat breed began as feral animals wandering the jungles and villages of Burma, otherwise known as Myanmar. This Asian country is sandwiched between Thailand and Bangladesh. The cat breed would wander through the villages looking for easy prey, usually, the chickens or other small farm animals kept for food. Eventually, some of them were tamed and kept as pets, even though they were still allowed to roam because of a high number of rats and mice in the villages.

Back then, they were mostly a tawny color or a medium brown. It wasn’t until some of these animals were fully domesticated that people began cross-breeding them with other domestic cat breeds to get the modern version of the Burmese breed with the burmese gene. Depending on whether you favor the European version or the American version, you will find very distinct differences in the breed. Additionally, you will also find very few of the original feral cats in Burma, and those that survive are being raised in sanctuaries to prevent the extinction of the true feral Burmese cats.

The American Burmese has a rounder face and head, smaller ears with rounder points, big, open round eyes, and only comes in four colors (as accepted by breeder associations). If you notice the other traits in the supposed cats you are viewing, look for sable/black color, champagne (cream with muted brown “points”), platinum (pale silvery gray), and blue (think blue Siamese point). The American version has a stockier, more muscular build with very round paws and a Himalyan cat’s sort of muzzle.

The American Burmese is for people who want the look of a Siamese without the trickier and less pleasant Siamese personality traits. Because the American version was created by breeding Siamese with Burmese, you will still get the vocal-ness of a Siamese, but it is much more gentle and less screeching when your kitty wants something.

The European version is more slender and graceful than its American cousin. It comes in ten colors, including the sable/black of the American version as well as lilac tortoise, blue tortoise, chocolate tortoise, red, cream, lilac, brown, brown tortoise, etc.. In fact, if you see any cats that you think might be Burmese, you will have to determine by more than their coat color and/or coat pattern to reaffirm what breed these animals are.

The European version also has wide-set and very tall, pointed ears. Their eyes are more cat-like in their slanted-ness, and their paws are oval-shaped and set to long, slender, almost Egyptian cat-like appearance. A lot of kitty owners who want a Burmese choose the European version because it looks like such an elegant, graceful and ancient feline god.

The Eyes of the Burmese

You do not have a true Burmese if the eye color is anything other than gold or green. Both gold- and green-eyed cats will have very striking and obvious eye colors. The gold often looks almost orange in its intensity, while the green is a bright but pale spring green to emerald green. It is not a Burmese if the eyes are blue, blue-green, or dichromatic (i.e., one eye each of two different colors).

Burmese, Not a Burmese

If the kitty-cat you get looks mostly like a Burmese, but its eye color(s), ear shape and height, or body form are off in appearance, the burmese breeder is pulling your leg. There is a good chance that the burmese kitten is mostly Burmese, but the breeder cut corners to get a litter. If you know enough about the breed, you can point out the flaws you see and possibly get the breeder to come clean.

It’s always best to buy a Burmese from a registered reputable breeder rather than a backyard breeder due to selective breeding. If you are okay with the kitten or young adult burmese being a mixed breed, then go ahead and buy it. You can always get a genetic test for breed completed at a later date.

Personality Traits of the Burmese

In terms of not being very feral anymore, they are very keen to form a very close bond with one person in the house. It is unusual for them to form bonds with more than one human, and they often respond to other humans by running or slinking away. You cannot force a Burmese to like anyone else or even come out of hiding to say hello. It goes against their nature. Cat lovers need to understand this!

Respect your Burmese cat’s natural instincts to be loyal to you or to the chosen family member and don’t try to force it to have a relationship or bond with anyone else. Respecting them for their unique personality traits makes them happier cats in the long run and less likely to run away, which you definitely wouldn’t want. If the person the Burmese kitty chooses is not you, you may want to consider getting another kitty to keep you company if the Burmese has clearly made his/her choice in which human to be loyal to.

Taking Care of Your Burmese Friend

Because of their ancestral diet, it is a good idea to feed them a raw food diet. This should not be just any raw food either. Ask a holistic pet expert what the best raw food is for this breed. The holistic pet expert will show you a few brands of raw food that are excellent for the Burmese’s unique energy and digestion needs. If you are able to provide effective nutrition for this breed, your pet will live a very long and healthy life and prevent kidney disease that is associated with a dry food kibble diet.

This breed has been accustomed to getting water from what it eats. That is common with most cats, but you may find that your Burmese is very finicky and refusing to drink water from a bowl. That habit is actually part of its ancestral breeding. Ergo, leave out a bowl of water, but provide him/her with a diet of soft food that has a very high moisture content. The moisture content should be similar to what he/she would have eaten if he/she were still a feral animal roaming and hunting in Burma.