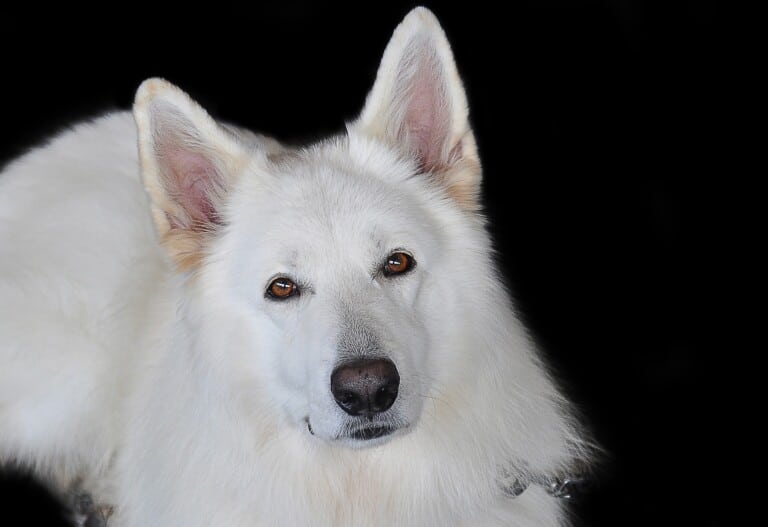 Imagine if you took a standard German Shepherd and crossed it with a Samoyed or an American Eskimo dog. The result might look a lot like the White Shepherd dog. Who knew such a dog could exist, this brilliantly white version of the German shepherd breed? More to the point, you are probably now wondering about these dogs and have a dozen different questions you want answered. We’ve got you covered on everything about a white German Shepherd you are dying to know.

Is the White German Shepherd an Actual Breed?

That’s the long answer to your question. The short answer is that the white coat color is a recessive gene trait, much like palominos or tabby cats that have recessive genes that contribute to their coat colors or patterns. While many a breeder for German shepherds may strive to achieve a white German shepherd puppy or two, it really is the luck of the draw when it comes to the recessive gene and getting the biology of the mother and father dog’s lineage to line up just right.

Any dog lover that loves German shepherds knows that these dogs were bred to herd cattle and/or sheep. The trouble was, the standard color and pattern markings of most traditional German shepherds was that it often became confused with the coloring of wolves in Germany and Austria. In the dark, owners would accidentally shoot their dogs rather than the wolves that were terrifying the sheep. It became almost necessary to force the white gene into every possible white shepherd puppy so that only the white dogs would herd sheep and not be confused for wolves in the darkness.

Because the white shepherd could blend in with the sheep, the darker-colored wolves would stand out in the herd as they tried to take down a sheep. Shepherds and sheep farmers could spot the wolves easier and distinguish them from their white coat dogs. Then they could accurately eliminate or kill the threat of wolves and not accidentally kill their herd dogs.

Another reason why the white fur on a German shepherd dog breed was so desirable was that it was considered rare. It was hard to come by, and most wealthy aristocrats or royalty were the first ones to get these white dogs. If you could get a white version of shepherds without being wealthy, you were most fortunate indeed and considered to have status. Now, they are still a sign of status, but almost anyone can buy a shepherd dog with a white coat when they are found among the litters of shepherd breeders.

Typical Use of a Working Dog

Shepherds, regardless of color, are considered members of the working dog class. They were bred and trained to surround and corral other animals. Perhaps the saddest part of their history was their use in the second world war to corral Jews and prevent them from leaving concentration camps on the threat of death by a dog.

Thankfully, you really have to heavily train a GSD to get it to chase after and/or maim a human. These dogs tend to have very loving and loyal personalities and temperament and do not attack other humans unless they view them as a threat or have been neglectfully treated and trained to attack humans. Their temperament is such that they would rather pounce on somebody and lick him or her to submission than hurt that person.

Variations of the White German Shepherd

After Germany’s shepherds and sheep farmers came to realize how invaluable a white herding dog was, other shepherds and sheep farmers in other countries realized Germans had the right idea. As such, other countries that regularly raised sheep for wool and food began breeding their own recessive white gene dogs, constantly striving to get that one or two white puppies out of each litter. The result was the white Swiss shepherd, or just Swiss shepherd, and the American white shepherd.

Both the Swiss and the American versions are variants of the German version, all with the coat color of white to slightly cream. The coats are double-layered in all dogs, a natural barrier against the harsh and cold winters of Germany, Switzerland, and Northern America. The coats have to be brushed often as these dogs will shed a lot.

Recognized as a “Breed”

We mentioned earlier that the dogs are not technically a breed, but a genetic mutation in coat color. While we stand by this fact, it is true that in 1999 the UKC finally recognized the GSD of the white persuasion as an official “breed”. As such there are a few things that are required in the breed standard in order to be considered a breed unto itself.

If white german shepherd breeders are going to consistently breed the white dogs, the breeders have to be licensed and register as breeders of white GSDs only. The idea is that the “breed” has to be kept pure, and that cannot happen if any haphazard breeding between white and colored shepherds occurs.

There is really no difference in how you train these dogs, whether yours is white or black and tan. You have to start when the dog is still a puppy so that the dog is not aggressive when it suddenly thinks it senses danger and wants to move. Remember, it is a herding canine and it has to be given expected tasks daily in order to maintain the dog’s emotional and psychological sense of well-being and purpose.

Obedience classes are a must but these dogs respond very well to training, given their historic background. It is important that your dog respond to commands without resistance so that you can take the dog outside and walk it for an hour daily. It is also a good idea to have a large fenced in yard and spend a lot of time playing with your shepherding dog. They love to fetch and perform tricks, all of which you can practice during playtime in the yard.

Care and Feeding Plus Health Concerns

The white fur of these dogs is not albinism. It is not related to any genetic defect of bodily organs or anatomy either, meaning that most white German shepherding dogs are happy, healthy companions the majority of their lives. Of course, a holistic approach to canine health isn’t bad either.

That said, your dog is going to need almost a gallon or more of water daily. These dogs are medium to large build animals and with as active as they are, they need a lot of hydration. Dogs, unlike cats, are omnivores, which means that they enjoy plant-based foods as well as meat. A raw food diet for dogs includes protein-rich vegetables like edamame and vitamin-rich vegetables like carrots. It frequently looks like a full-bodied stew in your dog’s bowl when you serve it up.

A white GSD of this size should eat at least twice a day, at least one to two cups of food each time. If your dog whines to eat a third or fourth time during the day, break down the three to four cups of food into smaller portions to help your dog feel less hungry all day. The other thing you should know about a raw food diet for dogs is that it contains everything your white GSD needs to reduce hunger and keep blood sugar normal. Your dog feels less hungry less often on a raw food diet.

Finally, a raw food diet processes better in your dog’s digestive tract. It will not bind your dog up, nor will it cause runny stools. If you see either condition in your white furry canine friend, the cause is something else you cannot see (like worms) and you should have your vet check it out.

As stunning and as impressive as this dog’s white fur, it requires work to keep this coat white. It is akin to anything else in this world that is white; it needs constant care to stay that way. Since German dogs of this breed type love the outdoors, love to run and play, and will frequently roll through or dig in the mud, your white puppy is going to need lots of baths.

Your white-furred dog will also need a lot of brushing. Daily brushing with a wire brush followed by a soft-bristle brush will keep your dog’s double-coat looking its best.

Shepherds have really long, really fast-growing nails. You’ll want to keep their nails groomed frequently. If your dog goes on a lot of walks or has consistent playtime outdoors, where they wear their nails down naturally, they may not need trimming as frequently.

They need their paw pads protected in winter as well. Invest in either a paw pad cream or doggy boots that may just be the cutest accessory on a snowy-colored animal you can buy. He or she will need to walk, regardless of the harshness of the weather, but his/her double-coat has him/her covered.

What dog looks like a white german shepherd? Similar in appearance due to their white color is the Samoyed or an American Eskimo dog.

Are German shepherds good family dogs? Yes, they are loyal, committed, and protective. GSD can be very protective of children. They have a natural inclination toward the love and protection of their family.

Do white swiss shepherds bark a lot? The swiss white shepherd is known for alerting his owners of any kind of threat. They will also scare off anything that shouldn’t be there with their vocalizations.