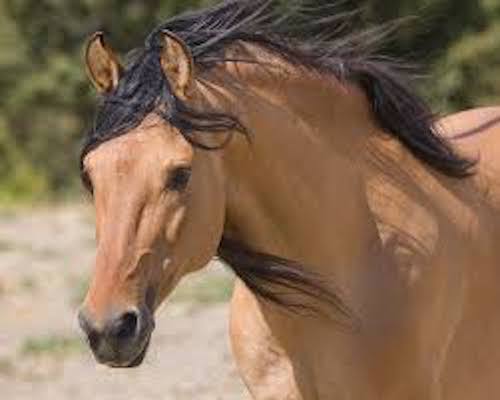 If you like or even love horses, there is a good chance that you have heard of the wild mustang horses. A mustang horse, or simply mustang, is one of the last surviving vestiges of the Old West. These wild horse herds have been running wild and free in the Western half of the United States, from Wyoming and Colorado to California, for over three hundred years. The original horses were Iberian horses brought here by the Spanish conquistadors and later Spanish explorers. Some of this horse breed escaped created small bands of the wild horse population and the rest is history.

Well, almost the rest is history. There is a lot more to these Spanish horses than most people realize and it becomes necessary to consider that the mustang population of wild horse, now more than ever, need human help. That said, let’s delve into everything about America’s wild horse, the Spanish Mustang, and maybe, just maybe, you may want to help or own one of these horses yourself.

Every Mustang horse herd has a hierarchy. Every herd, regardless of size, is led by one dominant stallion, followed by his mares, and contains foals and yearlings of both sexes. After the males in the herd reach a year old and the mothers wean them, the stallion will chase off the yearling males to prevent inbreeding and prevent any challenges for ownership of the herd and leadership.

Rogue males may roam in a pack together until they find a herd and want to challenge the leader. Older stallions may lose the fight if they are beyond their prime and then the younger studs take over the herd. This could happen several times in the same year. If you see a lone Mustang roaming about, there’s a very good chance that it is a stallion without a herd of his own. However, on rare occasions a pregnant mare about to give birth may roam far from the herd to give birth and return to the herd with her newborn foal the next day. You only have to look at the belly to tell what you are seeing.

The stallion that leads each herd tries to gain as many mares as he can. This is his harem with which he can breed as he pleases. As each mare comes into heat, the stallion will mate with her often to get her pregnant. If another stallion comes along and tries to mate with the mares in the herd, he will be challenged by the leader. The battles between the two stallions are often to the death, or until the defeated stallion gives up and runs away. Many male horses often die in an attempt to gain control of a herd, but that is how these horses keep going.

The Plight of These Horses

For a long time the Bureau of Land Management, or BLM, was fighting a losing battle with the elevated numbers of Mustangs and the need to share federal land with grazing cattle. Massive ranches encompassing thousands of acres of land fed the cattle raised on them, but it challenged the health and well-being of the feral horse. Cows will wrap their tongues around blades of grass and pull it up to chew it, while horses chomp it down to the nubs above ground leaving nothing for the cattle. Ranchers were angry enough to shoot the horses, and that just was not working for animal activists.

That is when the BLM got together with other groups and talked it over with the President and other VIPs to determine what should be done with the Mustangs. The Mustangs were a symbol of the American West, a part of the nation’s history and heritage, but the herds had grown to be too large. It was decided that to save these horses’ lives, the herds would require a little thinning out, and preferably without having to kill or slaughter them.

So the plan hatched to resolve this issue was rather simple, and it certainly appealed to hundreds of people for various reasons. Every year the BLM rounds up the herds of Mustangs, corrals them in pens, gives every animal a complete health physical, and then offers them a second chance to be someone’s beloved pet. Anyone who is willing to follow the strict requirements for adopting a Mustang (or feral burro/donkey) can bring their trailers to these events, pick out which feral horse or animals they want to adopt, pay the very tiny adoption fees, and take their animals home with them.

Everyone who pursues a Mustang adoption has to undergo a rigorous background check. It ensures that adopters are not employers of meat-packing plants, dog food processors, etc.. The BLM will not allow a single horse to go to slaughter for any reason. Once you pass the background check, you have to pay $150 adoption fee for each animal you want. This includes pregnant mares, which end up being a “two for one” deal. You must show that you have a trailer for proper transport, you have a vet on standby at home, and that you have boarding, shelter, and a plan on hand.

Most people want to train these animals to be proper riding horses. It absolutely can be done because the ancestors of these horses were domestic animals. It will, however, take time and patience before you can ride your Mustang, as they have typically grown up feral and are not accustomed to bridle, bit, and saddle.

Additionally, for the first time ever in 2020, the BLM is now offering a program to pay you to adopt a Mustang. The herds need even more thinning out, and if you can prove that you have taken excellent care of the horse or horses you take home with you, the BLM returns your adoption fee as a thank you for your support for the program. If you want to own and cherish an American original and living legend, the Mustang is the best way to do it.

Most Mustangs are about fourteen to fifteen hands high. For non-horse people, a “hand” is about four inches, and fourteen hands is about fifty-six inches at the top of the horse’s shoulder where the neck meets the shoulder and slopes to the back. Coming in at just under five feet in height, a Mustang is a medium-sized animal about the size of a large pony. This makes them an ideal riding mount for anyone of small to medium stature, once the horses are fully trained, of course.

Most of them are brown, bay, or chestnut in color. However, there is an occasional gray, dapple, pinto, or black Mustang in the mix. There is also the Kiger Mustang and bim mustang. Most of them will have white facial markings and/or socks/stockings. Very rarely is a Mustang a completely solid color.

They range from about eight hundred to eleven hundred pounds, depending on their height and build. The stallions that lead the herd are never adopted out, but you can adopt a male yearling. If well-cared-for a Mustang can live to be thirty years old or longer, almost a third of a human life.

You are not allowed to sell or give away the Mustang in the first five years. Ergo, you do have to make a commitment to each animal you adopt, regardless of any problems, behaviors, or illnesses the animals have. Additionally, if a Mustang dies in your care, you are supposed to report its death and how it died so that you will not be barred by the BLM from adopting another animal in the future.