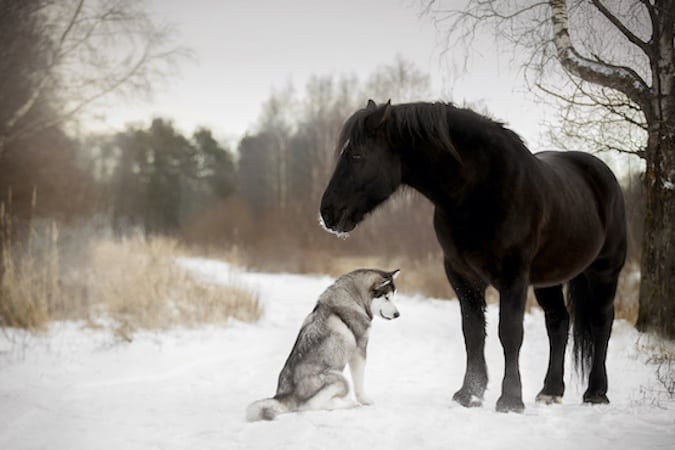 The Percheron horse is the French answer to the Scottish Clydesdale and the British Shire horse. Like many other of the draft breed, this particular horse breed has its own unique features and history. They often grow to be quite large, yet they are very docile in nature and have a calm temperament.

From the French Perche Province

These horses originated in Northwest France in the 19th century in a province formerly known as the Perche province. Their bloodlines have been crossed and recrossed over time to get a few more desirable characteristics into the breed, such as Arabian blood to give them a slightly sleeker look for carriage work. They were shipped all over the country and to other countries for various purposes.

How the Breed Helped the Allies in World War II

Most people don’t realize that horses were still in use in battle up through the second World War. If the cavalry wasn’t charging forward, then the very willing and unafraid Percheron war horse was used to pull cannons, machine guns, shell and rocket launchers and even supply carts for troops. Because the trusty Percheron breed horses were dominant in France and France belonged to the Allies, these horses helped do a majority of the heavy lifting and transport on the battlefield for the first World War in different parts of Europe.

These horses were also shipped to the U.S. very early on. They were preferred for farm work, as a driving horse over the Clydesdale, and only the British Shire was more popular for this type of work. That is why you will see many Percherons in the United States today.

One of the Largest Equine Breeds in the World

Percherons have set world records for being both the heaviest and the tallest draft horses in the world. The only horses who are heavier and taller are the Shire horses of Great Britain. As for Percherons, they can reach heights of seventeen or eighteen hands high at the withers/shoulder, and world records for Percherons is 19.1 hands high. You could easily be dwarfed standing next to these horses, especially if you are shorter than six feet tall (which most people are).

In terms of weight, they typically weigh two-and-one-half tons, give or take a couple hundred pounds. If that is not surprising enough, they are able to pull three to four times their own body weight, which is why they are such excellent workhorses and make a great driving horse. A team of Percherons working together have been recorded as having the ability to pull almost five times their combined body weight, a feat that is truly something to see.

Percherons are almost always black or gray. Dappling is very common, and gray that appears almost white is as desirable as solid black for the purpose of pulling carriages. In carriage pulling, people tend to look for two to eight horses of equal coloring and marking so that the sight of these horses together is quite uniform.

On occasion a very dark brown or dark bay is born. However, the color may darken or lighten as these horses get older. Most historic pictures depict Percherons as almost white, dapple gray and/or black. If they are cross-bred at any point in their lineage, you may see a chestnut, sorrel, bay or roan, but the true French Percheron are born black and become gray with age, much like a Lippizaner. The French only recognize black and gray Percherons in their national registry.

If you thought Clydesdales were muscular, then you have never seen Percherons. Percherons are extremely stocky-looking standing next to Clydesdales. However, all of that apparent stockiness is actually pure muscle. In fact, it would be very difficult to intentionally make Percherons fat because a) the amount of muscle they have burns off a lot of fat, and b) even overweight Percherons do not look fat because they are already such a heavy built breed.

Why Percherons Are Thriving When Other Draft Horses Are Fading

The plight of the Clydesdale is that they are no longer being bred as much. It is a similar situation with a lot of draft horses. Ergo, you might be wondering how it is that the Percherons seem to be thriving.

For one, these horses are show horses. They readily work and learn to do just about anything you want them to do. They will pull a carriage and also wagons in rodeos, work well in war reenactment performances, and even jump.

Yes, you read that correctly. They jump. Imagine these heavy draft horses in a jump competition. They have the power to leap from the ground, and they have the height that clears most jump obstacles before they even attempt the jump. In some competitions where the modern Percheron are allowed to compete, the ring crews have to reset the jumps for a higher height before you can take Percherons through the paces. That said, you may want to build a taller fence around your paddock if you choose to buy this Percheron draft horse!

Because of their very willing nature, versatility, and extremely gentle and calm temperament, it was decided long ago that Percherons would be the chosen horses to pull carriages in Disney theme parks. If you have never been to any of these theme parks, then you would not know that. However, if you get a chance to visit one of these theme parks soon, look for the Percherons pulling the carriages in the Magic Kingdom areas and up and down Main Street.

What You Need to Care for Percherons

They are big, lovable and loving animals. However, Percherons (for obvious reasons!) need a lot of space. If you have a stable now, you will need to create a double stall for each one you buy because they do not like being fenced in crowded or small spaces. Additionally, you will need a lot of open paddock space for them to run and frolic because their size allows them to take these enormous strides that put them from one end of a paddock to another in just a few strides. Avoid injuries and accidents to your Percheron breed by giving them lots of field space and making the fences much higher than you normally would for other breeds of horses.

In terms of feed, they eat what every other horse breed eats, but double or triple the amount. You will spend a lot more money on hay and grain than you have ever spent before. It helps if you can put them in a very grassy paddock or open field where they can graze during the warmer months and help reduce your feed bills. They will also drink significantly more water, so it’s important to have a clean, natural water source in the field or constantly refilled trough with enough water to keep these massive horses hydrated.

And don’t forget that if you go through a breeder go through reputable Percheron breeders.