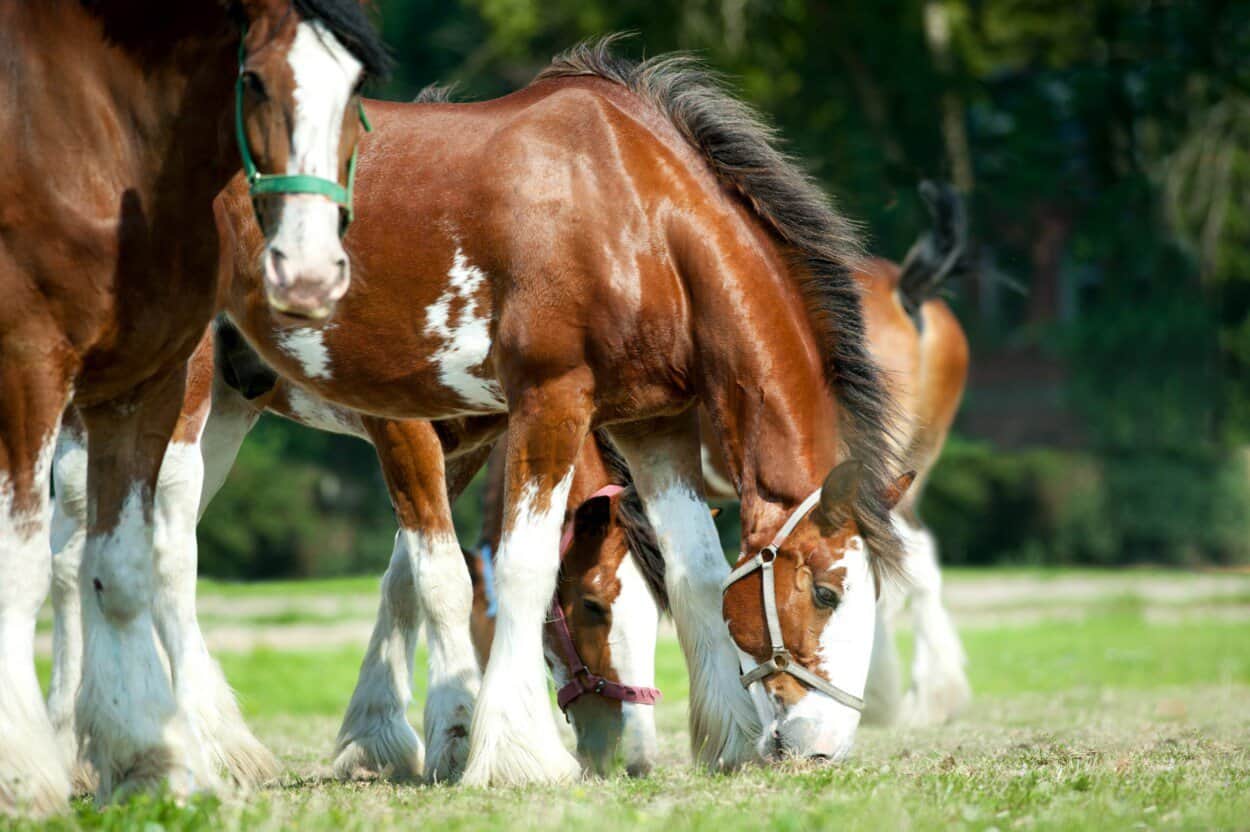 Every year during SuperBowl, people who love horses await the famed Budweiser commercials. Why? Because these commercials almost always feature the recognizable and beautiful Clydesdale horses. While most people admire these large draft horses for their beautiful coloring, feathered feet, and graceful movement, they really don’t know that much about this horse breed at all. To really appreciate this draft horse and what it’s currently going through, you have to really get to know the Clydesdale horse.

Originally, the Clydesdale breed was developed for the purpose of farming rough Scottish terrain. These animals are around two thousand pounds of pure muscle, with the ability to pull more than just a basic plow. This was necessary given the fact that a lot of Scottish land is not flat, nor is it free of rocky deposits. The powerful Clydesdale breed was able to plod and pull through terrain on slopes and hills and pull up rocks, boulders, and tree stumps with little effort, making them an invaluable farm horse.

In the late 1800s, some of the draft horse breed was shipped to the United States. However, their usual uses never quite caught on, and the popularity of this heavy horse never caught on either. The Clydesdales that remained in the U.S. were not commonly bred until much later, when it was recognized that the breed was slowly fading into history due to lack of use, need, and breeding.

The General Appearance of This Gentle Giant

This massive heavy horse comes in three main colors; brown, bay, and black. They typically have four white stockings or socks, with “feathers” from knee or elbow to hoof. They also sport blazes, snips, stars and full-on “balds” on their faces.

The most iconic face marking, of course, is the blaze from forelock to muzzle. While everyone loves the idea of owning a brown or bay Clydesdale that looks like the Budweiser horses, you should not underestimate the striking look of a black and white Clydesdale. A slight dappling of the black low on the hindquarters or high on the legs creates visual interest points on these particular horses.

In terms of height, they stand between six and seven feet tall, although there have been a few on record that broke the standard height measurements. Generally, they will weigh over a ton, which is why you never want to get in the way of a Clydesdale that wants to roll in the grass! Their temperament is very pleasant and amiable, too, making them easygoing pets as well as workhorses.

Is the Clydesdale an endangered draft horse breed? It is considered very close to being placed on the endangered list because its numbers worldwide have dwindled significantly. There’s purportedly only about five thousand or less pure blood Clydesdales left in the entire world, and less than a thousand registered breeding females. Both the Clydesdale Registry in Britain and the Clydesdale Preservation Foundation in the United States are working fervently to prevent this breed from becoming endangered, and ultimately, extinct.

Why These Horses Are Facing Such Major Issues

You would think after seeing a Clydesdale prance across an open field that there would be no way anyone would let these horses die off. However, it is not that they are not beloved or that there is some sort of plague or disease-causing this problem. Instead, it has a lot to do with the modern age and draft horses in general.

Draft horses were created to pull plows, pull wagons, pull carriages, etc.. When cars came along, people didn’t need these gentle giants to pull any mode of transportation anymore. When tractors were invented for plowing, these horses were once again replaced. In short, they and their main purposes became obsolete. When they were obsolete, there was no need to continue breeding them anymore, and then people just stopped breeding draft horses altogether.

Why the Breed Survives at All

Right about now, you might be wondering why the breed has managed to survive at all. It has a lot to do with Busch and Budweiser beer companies intentionally using them to draw their beer wagons a hundred years ago and then continuing to use them as icons in advertising. They bred these horses on their farms and in their wildlife preserves for decades, sustaining the breed for quite some time.

They had a direct impact on creating a newfound interest in the Clydesdale horse. As such horse lovers that were particularly interested in draft breeds began buying and breeding them. It created a sort of supply and demand for a time, but that has since ebbed away.

Now the Registry and the Preservation organizations have taken up the call to preserve these noble-looking animals. They are doing their best to prevent inbreeding that can ultimately kill off the breed completely. Hence, the breed numbers continue even if they are not used for much, and there is a campaign to promote them as good riding horses that may help.

Other Reasons the Breed Survives

The U.S. has many Amish and Mennonite communities. These communities still heavily rely on horses for both transportation and for farming because they don’t often buy machinery to do these jobs/tasks. Ergo, some communities will continue to breed and use Clydesdales.

From time to time, Renaissance Fairs will also use Clydesdales in their performances of jousting and horsemanship in the ring. This is another reason why these horses can continue to live on. You may even spot a few other draft breeds used for the same purpose appearing in the same ring because knights often rode draft horses. Draft horses were the only horses that could support the sheer weight of a suit of armor and still charge into battle. Hence, they are still ideal for these types of performances.

Can You Ride a Clydesdale?

Yes, you absolutely can ride a Clydesdale. It is an equine, after all! For anyone who has ever admired the prancing gait with the feathery legs blowing in the wind, you might seriously want to experience what that feels like when they move into their special gait.

Where to Buy a Clydesdale If You Are Absolutely Smitten

If you can hardly stand it and you absolutely must have one of these horses, you are in luck. There are plenty of breeders around the country. The most notable is the farm in Missouri that is dedicated to restoring the breed’s numbers. You can also check with the Clydesdale Preservation Foundation if you want to buy from a farm/ranch that does not cross-breed or inter-breed their stock. The Foundation will give you resources where you can find a full-blooded Clydesdale for sale.