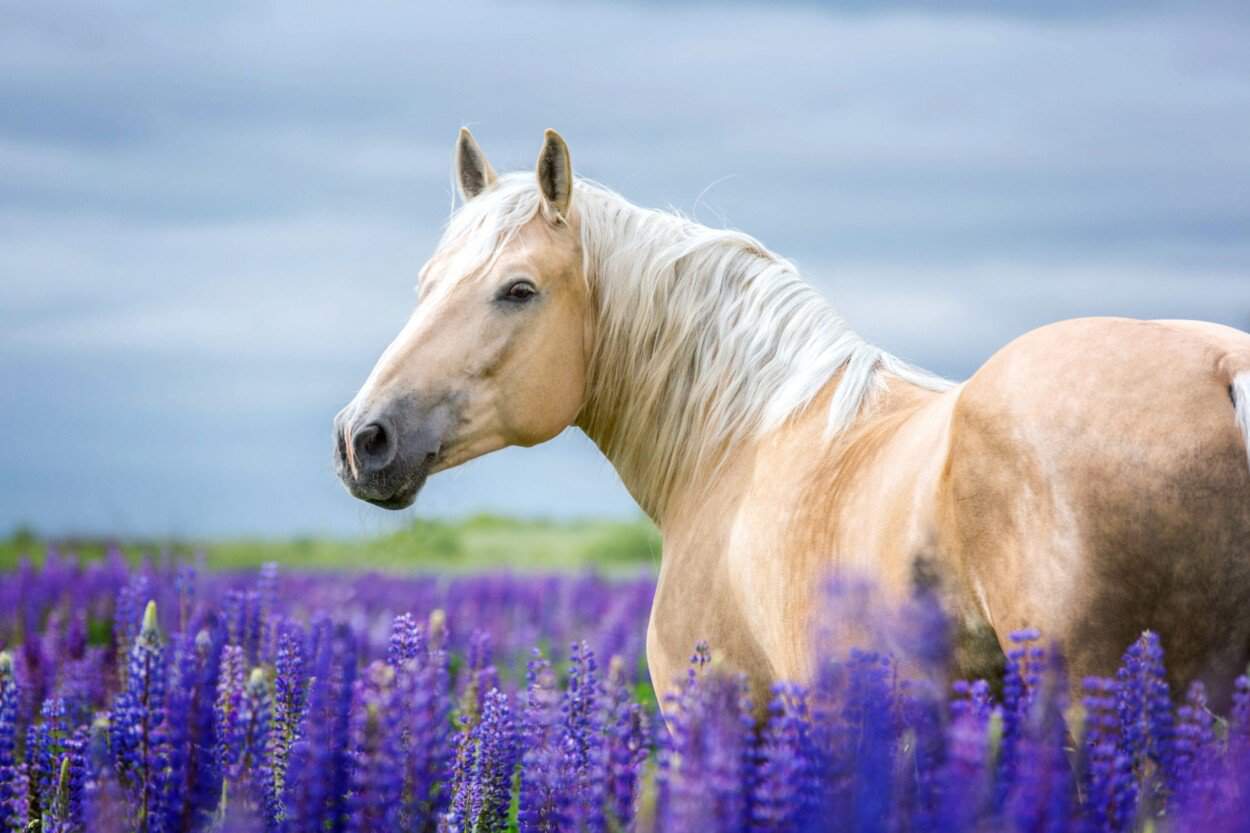 There are so many beautiful horses in the world, but very few can conjure up incredible equine fantasies quite like the golden Palomino. If you are old enough to remember Roy Rogers’ horse Trigger, or Mr. Ed (another famous palomino horse), or the golden beauty that was Xena, Warrior Princess’s beautiful horse, then you know exactly what these horses look like. What you may not know is the remarkable way in which these horses come about, and how hard it is to “strike palomino gold.”

Not a Breed, but a Color

These horses are not a color breed at all. In fact, more than half of all golden-colored horses are quarter horses first, palomino coloring second. Even so, you still may not have a true palomino horse! Confused yet? Most people who don’t know a lot about horses usually are.

In short, the golden coat color and white main and tail of these horses is a mutation throwing the cream gene or cream dilution gene. It is a very specific mutation, one which we’ll explain in a bit. Their color is not a breed; just a color, and it takes incredible patience and expertise to breed a golden horse into being.

The Color Mutation and How Difficult It Is to Achieve It

So, the white to cream-colored mane and tail and golden coat color of these horses is only achieved when two horses containing the mutated allele dominate the horse’s genetic makeup, hence the cream dilution gene. This sounds all highly scientific, and it is.

An allele in layman’s terms is a genetic mutation of a gene on a chromosome that is consistently located in the exact same place on said chromosome. It is usually one of two or more mutations on the same gene, too. If you were attempting to breed this specific mutation into the coat colors of an entire herd, you would need an equestrian

geneticist on staff to get exactly the right mutations on specific chromosomes over and over again.

Even then, you could breed two horses with the similar alleles for golden coats and cream-white manes and tails and still not get a palomino foal with golden color and palomino coat! That’s because it goes back to dominant genes and horse colors. Palomino horse breeders could spend an entire life as a breeder of the Tennessee Walking Horse, Quarter horse, and other horses where this mutation exists and maybe only achieve a small percentage of horses in your herd with the iconic golden coloring.

Conversely, if you have an equine breed that has the mutation in its body, but is definitely not golden-colored, it could still produce golden offspring. Without delving too much further into genetics, you should know that the allele mutations for golden coats and white mane, flaxen mane to cream manes and tails would have to match and dominate with relative frequency to manage to breed these horses consistently. It’s not impossible to do, but so incredibly difficult to achieve that only an equestrian geneticist would have any chance of coming close.

So, What Is a Palomino Horse?

What is a palomino horse, then, besides mutations on genes for coat and hair coloring? As previously mentioned, many of these palomino color horses are members of the quarter horse breed. In fact, it is estimated that more than half of all quarterhorses could be considered palominos. Additionally, any other horse breed that owes its ancestry to quarterhorses is subject to this color mutation, like the Tennessee Walking horse. Other horses, like the Thoroughbred, might be crossed with a quarterhorse and end up with the golden mutation.

Breed aside, these horses have quite the array of palomino coloring. They can be pale cream, almost white to dark liver bay, or so long as the white or cream mane or flaxen mane and tail exist. Many of them also have white markings on the face and socks or stockings of white on their legs. The most prized of these horses are the light to deep golden, almost chestnut coat color with pure white manes and tails. A true palomino horse also fades to a bland, uninteresting color in winter and then renews its vibrant coat again after spring shedding begins.

There are plenty of horses out there that are naturally colored like palominos. However, if a geneticist examined the genes of these horses and did not find the mutated “cream dilution” alleles, they are not true palomino horses. It has to be a true color mutation to be referred to as one of the golden horses.

If you are a horse owner buy a horse because someone told you it was a much-desired golden horse, you should have it tested. There are horse genetics experts that can do this for you. It may cost you some money, but it’s worth it to find out if you really have a horse with this color mutation. It is also worth knowing if you intend to breed this horse and you are attempting to get one or more palomino foal with the golden coloring.

Keep in mind not all horse colors in this range are golden either. Some are more reddish-gold with chestnut horse hues. Some are more bay-colored, and a few are so dark or dun that no one would dare refer to them as the color mutated-palominos. Yet, if they have the mutated genes, they are (and can be) referred to as palominos.

In an attempt to breed a golden horse line before they were able to understand that these horses are not a breed but a mutation, another color mutation resulted. If you have two palominos with dominant mutated diluted cream genes and you breed them together to get a golden foal, there is a very high chance you will get a cremello instead. A cremello is essentially the albino of palomino horses.

You know you have a cremello horse when the horse’s deep pink skin shows through its almost white coat and its very pale blue eyes take the place of the darker eyes common in its golden cousins. This mutation is related to, but is not exactly the same, like that for palominos and is a result of attempting to breed gold-colored horses as a breed. If you attempt to breed a cremello mutation with another horse, the offspring may have multiple health problems.

Not surprisingly, these golden horses were once prized by royalty. Imagine having a carriage drawn by four, eight, or twelve matching golden-colored horses! It would be quite the sight, wouldn’t it? That’s exactly what Kings and Queens were thinking when they would have several of these horses in their stables. The trouble was, they didn’t know or realize back then that you couldn’t just breed an entire herd of gold-colored horses because they weren’t a breed but a color mutation.

Eventually, the idea of a golden equine carriage team fell by the wayside when other horse breeds became much more interesting and popular among royalty. It was then that these horses began a different path towards North America. Here they were bred to wild and nearly a wild horse that would be ridden by Native Americans for hunting, raiding, etc.. Yet, most people still think of them as a rare and beautiful sort of equine that is nearly impossible to achieve through breeding practices (and they’re mostly right).

Want Your Own Golden Horse?

It is almost impossible to resist the idea of owning your own palomino-gold horse. Yet, it is equally as simple to be fooled by the “fool’s gold” version of these horses too. If your primary goal and focus in life is to have a true golden-palomino mount, you will need to have the genes of the horse for sale tested by an independent equine gene company. Only such a test can attest to finding real gold in a horse’s genetic makeup.

As far as horse names are concerned, being a horse lover, you could name your horse just about anything. It doesn’t have to be related to its coat color, although most people will use such a horse name anyway. Here is an example list of names a lot of people typically name their gold-colored horses:

However, if your horse is a purebred of any breed, and it has registration papers, there is a good chance you don’t have to name it anything. Its dam and sire have both contributed to its name. That name cannot be legally superseded because of the horse’s lineage. If you just want to use a “gold” nickname when spending time with your horse you can.

There are no mutated-color gene-specific risks beyond those associated with creating cremellos. If you have a cremello, it might be blind, deaf, or have some other hereditary gene-specific issue. Inbreeding in an attempt to get more golden horses also produces massive congenital health issues, but if you are not intending on attempting to breed horses to get this type of color, it’s not an issue.

On the flip side, these horses can experience many of the health issues related to a specific breed. Since quarterhorses make up half of all palominos, the health risks associated with quarterhorses should be considered before purchasing an equine pet. If you have a vet do a thorough health check on a horse prior to purchase, that makes a huge difference in the health of the animal from the start.

Find out what breed or breeds a horse is before you jump at the chance of owning a shiny gold horse. Then you will know exactly what you are getting into before you buy it. Most of the general health issues horses have can easily be treated through proper diet and exercise, regardless of the breed of the horse or the color of its coat. Be prepared for expenses related to horse ownership and you should be fine.

Is a palomino a breed of horse? No, it has to do with having a particular gene. The Quarter horse and the Tennessee Walking horse are commonly Palomino.

How tall are palomino horses? There is no specific height of the palomino since they can come from multiple different types of horse breeds.

Do you know the difference between a palomino horse and a cremello? A cremello is essentially the albino of palomino horses. This results from breeding two palominos with the dominant mutated diluted cream genes and this increases the risk of health issues.

What are the differences between buckskin and palomino? The primary difference is the buckskin will have black lower legs, tail, and mane. Where the palomino will not have the black points.

Where did palominos come from? The palomino received its name from Royalty in Spain; Palomina. They came to America in 1519, brought by Cortes.