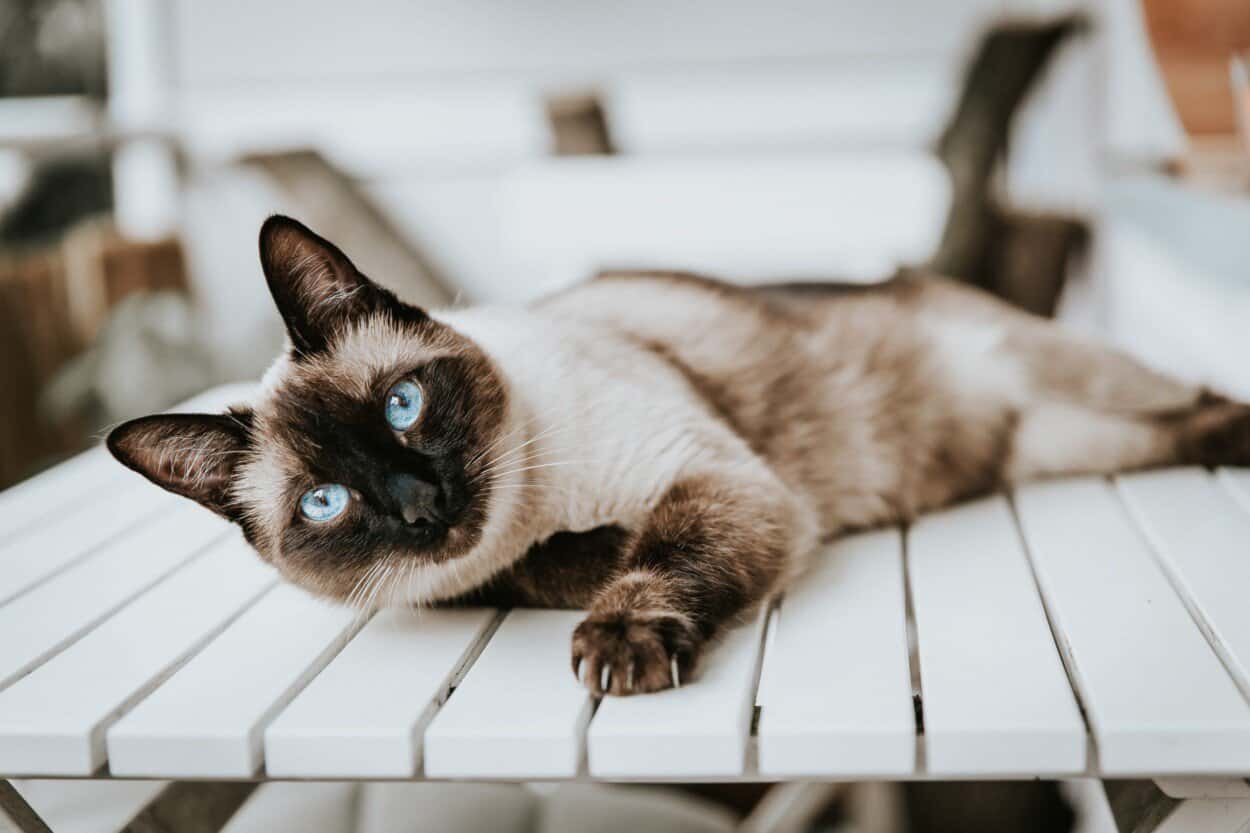 There are cat breeds that seem to have certain personality traits other breeds don’t. For example, Persian cats seem to be the most off-standish. This ancient breed that was once known as Siamese Royalty was the first Siamese cat and was the breed standard. The traditional Siamese cat also has a personality trait. It seems to be very shy and prefer the company of one sole human and no one else. To understand why your own Siamese feline may exhibit this tendency, you have to get to know more about these very recognizable kitties.

The Origins of the Siamese

Sometimes the original Siamese can be mistaken for a Burmese, thai cat, or Tonkinese. Cat fanciers will know the difference. These cats were not bred by combing this breed with that breed until someone arrived at the Siamese breed. On the contrary, the siamese kitten occurred quite naturally, with their black stockings, ears, tail, and faces. They were original to their country of Siam, which later became Thailand. Not surprisingly then, they resemble a lot of the cats that came out of the Orient, with almond-shaped eyes, high pointed ears or large ears, narrow faces, and slender limbs. They may have crossed eyes or a kinked tail. You can see these physical traits in that domestic cat and other Asian cats, like the Oriental Shorthair, the Bengal Cat, and the Korat.

As far as personality goes, the Siamese cat breed is distinct. A purebred Siamese will meow, cry, and make dozens of other sounds to get your attention. They are most un-cat-like in that the modern siamese, they constantly want to be near a human rather than completely alone. However, that does not mean that they will want the company of everyone in the house. They are notoriously loyal to the one human that feeds them the most. They will follow that one human all over the house, waiting for a chance to sit in that human’s lap or curl around that human’s head or feet. A cat lover will absolutely love this.

Some Siamese cats will even wiggle in under the covers at night, preferring to sleep just like a human and insisting on having pillow space. For anyone that loves to snuggle up against a cat’s body while in bed, this is a very endearing quality. For anyone that would rather have more space to sleep, it isn’t such a great thing at all.

Siamese kittens tend to imprint quickly on a human, which makes it difficult to home them if a reputable breeder has picked them up and held them too much. It is hard not to want to pick up one of these kittens because they will have the most vibrant blue eyes, beautiful coat, body color, and the sweetest little faces. They will probably have siamese markings, selective breeding bearing chocolate point, blue point, or seal point siamese. The point color may be variable though.

While it is important for a siamese breeder to make sure the kittens recognize and accept humans as friends, it is very important for Siamese breeders to avoid getting too attached or familiar because then the kittens will not be quite so interested in the humans that take them home. It may be a challenge for them to adapt to a new human if they are too attached to the reputable breeder and/or the breeder’s family. Kittens, as well as Siamese adults, love to play.

They are extremely playful cats requiring as much activity as a Springer Spaniel. That said, you should have lots of different cat toys in a basket for your Siamese friend to play with and you should not be surprised when he/she intentionally knocks all the toys out looking for the one or two favorites he/she loves the most. If their favorite toys go missing, Siamese cats are very vocal about it, crying loudly at all odd hours until you find the missing toy or replace it with a duplicate.

The Physical and Emotional Sensitivity of the Siamese

By now, you are beginning to suspect (if you have not personally experienced) how sensitive emotionally a Siamese kitten can be. It should also not surprise you to learn that their physical selves can be equally sensitive. It takes a lot of loving care to own and care for a Siamese cat breed.

In terms of their emotional well-being, they will be quite miserable without their humans. They will cry ad nauseum if you leave them home alone with no human companionship. Cat owners need to be aware of this.

In fact, if you live in an apartment building, there’s a good chance that you will receive several noise complaints because your Siamese has been crying too much in your absence. If you live where you are not supposed to have a pet, then your Siamese will alert your landlord and neighbors the first time you leave the house to go to work all day.

There are only two ways around this. One, have someone come over to pet-sit if you are going to be gone more than a couple of hours, or put your Siamese in a kitty daycare during the day. Two, get a second Siamese to keep the first one company, which usually works because Siamese cats love having another Siamese to talk to.

If you ignore the cries, whines and vocalizations of your cat, the next step is to smack you. Your Siamese will let you know not only by “speaking” about his/her disgruntledness but also by waiting for the perfect moment to slap you with a paw. Conversely, Siamese cats can be extremely affectionate, very loving, and always have head rubs, head butts, “kisses”, and gentle paw touches if you are willing to talk to/with them.

In terms of physical sensitivity, these cats have very sensitive digestive systems. You have to feed them a good diet of food that will not upset their tummies. If their tummies are upset, your entire cat will be upset and be more likely to cry and make a lot of noise to get your attention.

Siamese cats suffer from several Siamese-specific maladies as well, including congenital heart defects which could require surgery, asthma and bronchial disease which is often induced from the cat’s environment and contact with allergens and chemicals that weaken your kitty’s immune and histamine response systems, and amyloidosis, which is the deposit of amyloid proteins in kitty’s liver.

You can treat these issues holistically by making sure your home is immaculate, free of dust and dirt, and that the filters used in vacuums and your heating/air conditioning and ventilation systems is removing all the allergens that can affect your kitty’s health. It is also a good idea to switch to completely natural cleaners, such as white vinegar, rubbing alcohol, baking soda and borax. Steer clear of ammonia because it is overpowering and can confuse your Siamese into thinking that every inch of the house is a litter box for urination.

Siamese kitties, with the exception of very fluffy kittens, have short coats and tend to shed if you do not feed them high quality food. Feed them the best food you can, and you might want to try a raw diet. As this provides the best specie specific nutrition that creates a strong immune system. Brushing your cat only has to occur once a week, although some Siamese cats will insist that you brush them more often because they like the attention and the sensation of the brush.

Most of the time they do not like water, but if your kitty needs a bath bad enough, use just a little water with an extremely mild natural soap. Towel-dry by rubbing only so that your pet’s sensitive skin isn’t irritated. If your cat shows signs of skin irritation, there is an imbalance in his/her system that will need to be corrected. Consult with a holistic pet healer to see what the source of the irritation is and how you can make changes to remedy the problem your cat has.